Odzun Church is one of the unique complexes which passed through different periods of construction. As a result, these periods are vividly reflected when you have a look. Situated at one of the most wonderful corners of Armenia – in the Lori region, it amazes everyone with its combination of spirituality, rural life, simplicity, wisdom and not only…

The first church was built still in the 6th century. Afterwards, Hovhannes III Odznetsi reconstructed the church later in the 8th century. He served as the Catholics between 717 and 728. This is the very catholicos who played a crucial role during the Arabic invasions of Armenia.

The site has lots of gravestones of the clergy around the church and a funerary monument. Its stepped platform supports two carved stelae between double arches. The east and west sides of the monument introduce scenes from the Bible and introduction of Christianity in Armenia. Its style suggests that it was probably erected in the 6th century. Your visit to Odzun may become one of the highlights of your trip in Armenia.

It’s a gorgeous place which reflects not only the belief of Armenians but also their taste, long history, simple life and architectural talent… 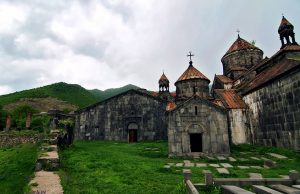 From$30
This trip will show you the wonders of Lori province such as Sanahin, Haghpat and Odzun. Do you want to
0
Sign up for our newsletter to get travel news, information about discounts and inspiration from Feel Armenia...