You drive three kilometres Southeast of the town of Artik in the Shirak region and reach to the magnificent monastery of Harichavank which is a 7th-century masterpiece of Armenia.  Besides being a very important spiritual and educational centre it is also among many of archaeological sites of Armenia where the excavations show that the place was in existence during the 2nd century BC.

The earliest part of the complex is the Church of St. Gregory the Enlightener. The exact founding date of the monastery is unknown (probably 7th century). The dominant church is the Holy Mother of God which Zakare Zakarian built. He was Amirspasalar (commander-in-chief) and Prince who liberated and ruled Eastern Armenia in the 13th century.  The architectural style amazes with the ornaments,  umbrella-shaped dome, cruciform floor plan, narthex with a stalactite-ornamented ceiling, and a bas-relief of the pieces holding the miniature of the church.

Throughout its long-lasting existence, the monastery was repeatedly updated. The most significant restoration took place in the second half of the nineteenth century.  The place also gives an impression of a fortress with its surrounding walls and towers.

But this is just the little part of the things that you can discover at Harichavank. Don’t miss it when you are in Armenia.

The Armenian Highland is a mysterious and little-explored territory. References concerning the Highlands, Armenia and the Armenian ethnicity, which lived
0 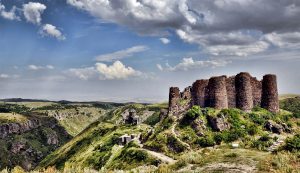 Enjoy our 10-day family vacation in the best locations and monasteries in Armenia with a Professional English Speaking Guide
0
Sign up for our newsletter to get travel news, information about discounts and inspiration from Feel Armenia...